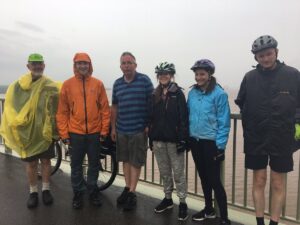 For three days at the beginning of May, a small group alternated between battling and basking in the elements on a sponsored cycle ride from the Dales to Hull. Following the course of the Rivers Swale, Ure, Ouse and Humber, the route represented both ‘returning to the source’ and ‘drawing on the wells’, both features of the religious life.

Great fun was had by all – even 17-year-old Beth who bravely completed the course with a broken collar bone which resulted from a cycling accident while training. The distance was rather greater than expected, but the opportunity to take in such splendid scenery was adequate compensation; we even managed to take in some of the scenery more than once. We finished by pouring water from the source of the Swale into the Humber from the Humber Bridge, helped by a howling gale and driving rain.

More than £2,000 has already been raised by the ride and we give grateful thanks to all those who have already sponsored the group. If you would like to sponsor the cyclists retrospectively, please visit www.mydonate.bt.com/events/crbikeride/436839

George CR has made a short film of highlights from the ride together with his reflections which can be found here https://youtu.be/Z7FknMh5Ub8