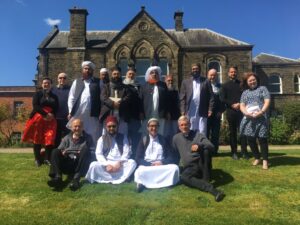 established fellowship; it was only their second time away together. Eleven people came for 24 hours at the beginning of May, including an imam visiting from Pakistan, and they joined us in Church and at meals. They shared together about practices of prayer and contemplation in the two traditions, including from CR’s perspective.

“During our final session we divided into ‘twos’, with an imam and a priest in each pair, and shared together what we had learned. The Imams commented on how impressed and encouraged they were to find people who prayed four times a day! They also commented on the sense of peace during the worship in chapel. We had lots of very useful conversations and deepened our friendships with one another – Mirfield was an ideal place for us as a group because the physical and spiritual environment lent itself to so many questions and discussions.”

For the brothers CR, we were aware of being the recipients of something special – even when there was little language in common. There was a grace in the meeting which conveyed a palpable blessing to us. And, in the aftermath of the evil of the Manchester Arena suicide bombing and other atrocities, something further of the significance of that grace became evident. Our society needs such sustained and searching friendships, and British Muslims need Christians on whom they can rely. May this fellowship continue to flourish.