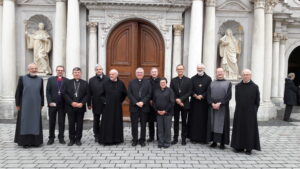 Our friends will know that we have long been twinned with the Roman Catholic Benedictine Abbey of St Matthias in Trier, Germany. In order to mark the approaching 50th anniversary of our brotherhood together, and the 500th anniversary of the Reformation, we jointly organised a small conference at Trier for three Anglican bishops and three German Roman Catholic bishops, on the reckoning that in all our ecumenical relationships neither side had much experience of the other. Two brethren from Trier participated and also Fr George and Fr Thomas from Mirfield, together with Dr Jennifer Cooper from the College. The meeting was an unexpected success, in which the German bishops were fascinated to learn at first hand something about Anglicanism, and the Anglican bishops likewise in the opposite direction. The Anglican bishops were +Robert Innes, Bishop in Europe, +John Inge of Worcester, and +Stephen Platten, now in London Diocese. The meeting produced a communiqué which was passed on to the Vatican by the Archbishop of Birmingham, and the question of relations with Anglicans is being raised at the next meeting of the German Bishops’ Conference. So we look forward to what may happen next.