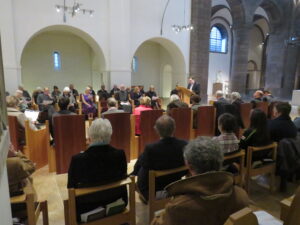 On Sunday afternoon, 22nd January, the Community of the Resurrection hosted the Churches Together in Mirfield and District and their annual Unity Service.  This year’s liturgy was written by the churches of Germany, and its theme entitled “Crossing Barriers” reflected their experiences of life in a country that was divided by the Iron Curtain during the Cold War.

Nearly fifty people gathered in the Community Church for a service that involved participation from members who are Anglican, Baptist, Methodist, Moravian, Roman Catholic and Salvation Army.  During the course of the liturgy a wall of stones was erected, representing the barriers that humanity creates to separate ourselves one from another.  Later within the service that wall was torn down and rebuilt in the shape of a cross.

It was an inspiring occasion of ecumenical cooperation and the hospitality of CR continued after the service with refreshments in the New Refectory.