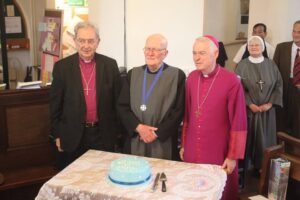 On St Matthew’s Day in 1958 I was ordained priest in Lichfield Cathedral, and on September 22 2018 I presided at a Mass of thanksgiving in St Mary’s Church, Kenton. This brought together a congregation of people I had worked with over the 60 years. There were gaps (for I have lost contact with my first parish), but as a member of the Community from 1962 we were celebrating a very varied ministry based both here at Mirfield and elsewhere, including a very blessed time in South Africa with the dual role of being chaplain to the Anglican students of the Afrikaans-medium university of Stellenbosch and being the only other mobile and youthful member of the team!  Sadly, there was nobody from South Africa in Kenton on September 22, but there were many from other activities – from my time on General Synod; from living in Covent Garden seeing many for counselling and advice; Jim Swanton in Sandwich, and many many others. After being student chaplain at Stellenbosch, I came to a similar role in the University of London, though as a member of a big team. From that, I returned to Mirfield to begin my time in the Bursary which is still with me.

My ministry has been – and continues to be – exciting and wonderfully varied, involving all sorts and conditions of people, nearly all of whom were represented in the congregation in that beautiful church.  Many and varied were these people, along with apologies from others. We ended the Mass, which was of our Lady, triumphantly singing the great Walsingham hymn, “Joy to Thee, Queen”.

Then came the lunch provided in the church by the team of catering ladies who seized the opportunity with abundance; old friendships were renewed and new ones made. I had thought it was a rash undertaking, but the response made it worthwhile, former London students meeting again for the first time for years. I think we could have gone on into the night with laughter and reminiscence, but I had to get to my beloved Convent and Nursing home in Chiswick to be spoilt for a long week end.  So it was a fitting celebration all in the context of giving glory to God for his blessed Mother, who liked and still likes a good party.