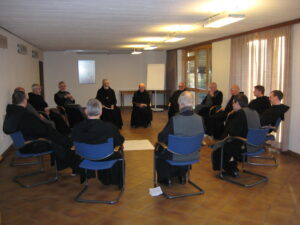 As part of a regular cycle of exchanges, George, Simon, Nicolas and Marc travelled to Trier, Germany in December, for a four-day visit to the monastery of St Matthias. Our communities have a very close relationship, and this visit was an especially good and happy one. We shared in their life, had discussions about the future of our relationship, and about Brexit and monastic life in the modern world. There was an outing to a former monastery which after Napoleon became the porcelain factory of the firm Villeroy & Boch. In the church nearby we saw an ancient altar going back to Roman times.

We always have simultaneous translation at our meetings, but the CR brothers thought afterwards that we need to make learning German a priority for all our new recruits, as it is the relating outside formal meetings that can be especially good for building friendships. In July, a group from Trier will be coming to the re-hallowing of our church on. The relationship with St Matthias began in 1968, so next year we will be marking 50 years of growing unity between us.