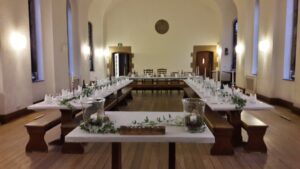 Every year the College celebrates the anniversary of its foundation (going for over 100 years!) on the feast of SS Simon and Jude.  Foundation day is one of those occasions which isn’t meant to interrupt a normal study day, consisting of an evening Mass presided over by the principal and followed by a formal dinner, but which ends up becoming one of those great mucking-in days of moving tables, creating weird and wonderful flower arrangements, and transforming the College into something completely magical.

It’s also a great moment of transition, after the flurry of the first couple of months; a day when new students get a chance to take on their new roles (from the flower officers, 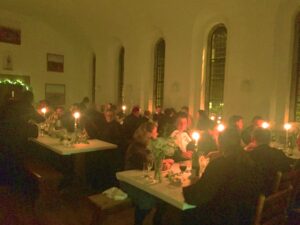 I was talking with a couple of the new students about Simon and Jude being our patrons – two saints we know almost nothing about, other than their decision to give up their lives and follow Jesus – and we all agreed there was something wonderful about following in the footsteps of two ‘unsung heroes’ (and something very Mirfield about not being the most important or most praised but plodding along and getting things done!); but the great act of celebration – of beautiful liturgy and of feasting together – gives us all a brief foretaste of things to come, and a moment to pause and give thanks for the life of this marvellous College and Community.

Preserve us, O Lord, while waking and guard us while sleeping, that awake we may watch with Christ and asleep we may rest in peace.
#IntoSilence

Please nominate us in Ecclesiastical’s 12 days of giving. It’s quick and easy to nominate us. Just visit https://www.movementforgood.com/12days/index.php?cn=232670&ct=church