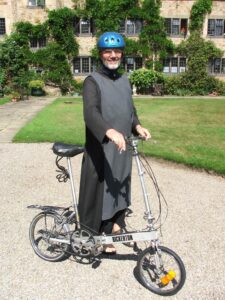 I depart for Israel on Friday 9th of February and will be staying for a week in the Dormition Abbey on Mount Zion, the home of a German Benedictine community. Then they are holding a Superior’s election (déjà vue!) chaired by our friend Br Ansgar from Trier. So I have to go away for a week, and will be staying in a hostel in Nazareth, and another on Mount Tabor, and then a few days in a hostel in Tiberias, where I plan to hire a bike for the sponsored one-day ride around the Sea of Galilee, first going south, then up the other side, through Golan, and round to Capernaum and several other interesting places, and down to Tiberias again. The ride will be on Saturday 24 February, when I’m hoping traffic will be lighter on the Sabbath. On the following Monday I catch a bus through the Palestinian territories to pray on it through the journey for all the people involved in that anguished situation. Then a few more days at the Dormition Abbey in Jerusalem (perhaps under a difference Superior…) before coming home on 2nd March.