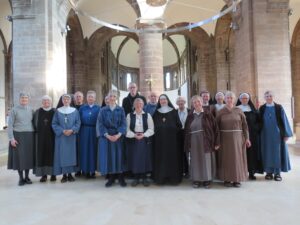 Every year the monks, friars and sisters of the Church of England who have oversight of their religious communities gather for fellowship and reflection together on matters of mutual concern. In recent years this has been at Mirfield. And so we had the ‘Leaders’ Meeting’ at CR 8th-12th October, the first I’ve attended. The matters of mutual concern included reflecting on the proposed canon on the religious life as it makes its way through General Synod. This is a new departure for Anglican communities, placing us in a new relationship with the wider Church and her bishops – and you can imagine that the leaders had much to say.

But we were also able to listen to the biblical teaching of Bonnie Thurston, the American scholar and poet, who joined us. Bonnie spoke on Mark’s Gospel as it points to themes of the religious life: –

The Wilderness – What was it that was lacking in the organised religion of Jerusalem that drew the crowds out into the deserted places to hear John? Bonnie showed us how Jesus becomes the symbol of plenty in the midst of scarcity.

And Ascetical Practice – It presents an alternative symbolic universe: participating in the lifestyle is more important than holding propositions. So we learned anew that ascetics are those who have imagined a new reality and envisaged the future in hope.

By God’s grace, may it be so with our communities.